Always practice responsible research. You should read and educate yourself before undertaking research with any chemical. The Psychonaut Wiki has some very helpful resources and information on O-PCE. Never conduct research with a chemical without learning about it first.

2′-Oxo-PCE (also known as as Eticyclidone, and O-PCE) is a lesser-known novel dissociative substance of the arylcyclohexylamine class that produces dissociative, anesthetic, stimulating and hallucinogenic effects when administered. It is structurally related to arylcyclohexylamines like MXE, 3-MeO-PCE, and deschloroketamine and is speculated to produce its effects through its activity as an NMDA receptor antagonist.

The structural similarities O-PCE shares with DCK and ketamine which has been speculated to have antibacterial properties,[1][2] has raised some concern as to whether it also shares these properties as well. However, due to the lack of scientific research on the subject, whether this is true currently remains entirely unknown. It is advised that users of this substance should keep in mind that the possibility of prolonged use may pose a serious threat to one’s health and immune system if this does prove to be the case.

O-PCE is an example of a contemporary designer drug specifically chosen to mimic and/or replace the functional and structural features of its predecessors. It has recently become commonly available through online research chemical vendors[3] where it is being marketed and sold as a designer drug replacement for MXE and other dissociatives for recreational purposes. Unlike many other research chemical dissociatives, there is almost a total absence of scientific literature on O-PCE, particularly with regards to its toxicity, addiction and abuse potential in humans.

Due to its novelty and extremely short history of human usage, all information related to the use of this compound should be treated with extreme caution. Users should also avoid frequent redosing as it is reported to be relatively easy to overdose due to its potency and stimulating nature. It is strongly recommended that one use harm reduction practices if choosing to use this substance.

O-PCE, or 2′-Oxo-PCE, belongs to the arylcyclohexylamine chemical class. Arylcyclohexylamine drugs are named for their structures which include a cyclohexane ring bound to an aromatic ring along with an amine group. Deschloroketamine contains a phenyl ring bonded to a cyclohexane ring substituted with an oxo group (cyclohexanone) at R1. Bound to the adjacent alpha carbon (R2) of the cyclohexanone ring is an amino ethyl chain -NCH2CH3. 2′-Oxo-PCE, like MXE contains an amino ethyl chain rather than the amino methyl chain found in DCK and ketamine. 2′-Oxo-PCE is homologous to DCK, differing only in the length of their carbon chain.

Due to the lack of research regarding the substance, all discussion regarding the pharmacology of it is purely based on its structure and subjective effect similarities to other arylcyclohexylamine dissociatives such as ketamine, PCE and methoxetamine (3-MeO-2′-Oxo-PCE). While no scientific studies have been conducted to verify this, structure-activity relationship analysis suggests that 2′-Oxo-PCE likely exhibits its observed effects principally as an NMDA receptor antagonist, although other neurotransmitter systems may be involved.[citation needed]

NMDA receptors (a subtype of receptors for glutamate, which are the principle excitatory neurotransmitters in the nervous system) allow for electrical signals to pass between nerve cells in the brain and spinal column; for the signals to pass, the receptor must be open. NMDA receptor antagonists have been shown to disrupt this signaling by blocking these receptors. This disconnection of information flow in the nervous system leads to loss of sensation (anesthesia), difficulty moving (motor discoordination), and eventually this substance’s equivalent of the “K-hole.”

O-PCE is classified as illegal in:

ALL PRODUCTS ARE STRICTLY FOR RESEARCH PURPOSES ONLY AND NOT FOR HUMAN CONSUMPTION. 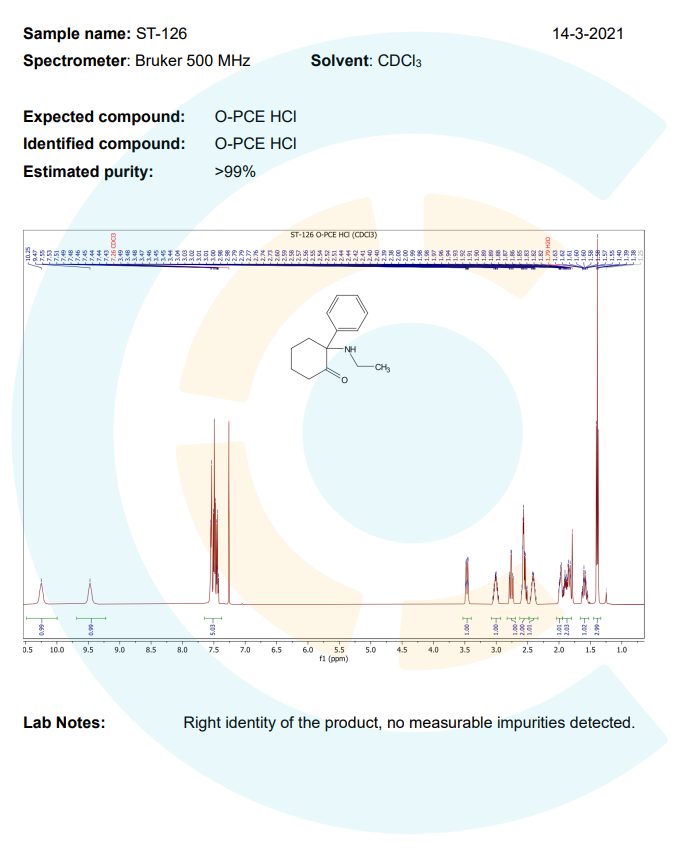