Always practice responsible research. You should read and educate yourself before undertaking research with any chemical. The Psychonaut Wiki has some very helpful resources and information on 3-HO-PCE, so does The Third Wave and Set and Setting. Never conduct research with a chemical without learning about it first.

3-Hydroxyeticyclidine (commonly known as 3-HO-PCE) is a novel synthetic dissociative substance of the arylcyclohexylamine chemical class. It produces potent, dose-sensitive dissociative, hallucinogenic and euphoric effects when administered. Unlike its close structural analog 3-HO-PCP, this compound has no precedent in the scientific literature before being offered on the research chemicals market in the 2010s.

Early discussions of this compound have revolved around whether it possesses an appreciable affinity for the μ-opioid receptor given its structural relationship to 3-HO-PCP, which has been shown to display affinity for the μ-opioid receptor in animal models. Whether it produces any of its theorized opioid effects in humans is the subject of ongoing discussion. If it does, 3-HO-PCE may pose unique risks relative to other dissociatives, particularly when it is redosed.

Following other substances of its class, particularly methoxetamine (MXE), phencyclidine (PCP), and 3-MeO-PCE, it is speculated to be able to induce a state known as “dissociative anesthesia”. Early reports suggest that this state is difficult to reach relative to other dissociatives, and its general effects profile has been characterized as “lying halfway between 3-MeO-PCP and 3-MeO-PCE.”

3-HO-PCE, or 3-hydroxyeticyclidine, is a synthetic dissociative of the arylcyclohexylamine class. The structure of 3-HO-PCE is composed of cyclohexane, a six-membered saturated ring, bonded to two additional groups at R1. One of these an ethyl chain bonded to its nitrogen group. The other ring is an aromatic phenyl ring, substituted at R3 with a hydroxy group.

3-HO-PCE is an analog of PCE and structurally homologous to 3-MeO-PCE.

While no formal studies have been conducted, 3-HO-PCE likely acts principally as an NMDA receptor antagonist.

The NMDA (N-Methyl-D-Aspartate) receptor, a specific subtype of glutamate receptor, modulates the transmission of electrical signals between neurons in the brain and spinal cord; for the signals to pass, the receptor must be open.

Dissociatives inhibit the normal functioning NMDA receptors by binding to and blocking them. This disruption of neural network activity leads to loss of normal cognitive and affective processing, psychomotor functioning, anesthesia.[citation needed]

There is ongoing speculation as to whether this compound possesses μ-opioid receptor activity due to its structural relationship to 3-HO-PCP, which has been found to have appreciable affinity as a μ-opioid receptor agonist in animal models.

3-HO-PCE is classified as illegal in:

You can buy 3-HO-PCE and other dissociatives like 3-HO-PCP, 3-MeO-PCP, and DCK here at Chemical-Collective. All of our chemicals are third party lab tested.

If you wish to see NMR results for 3-HO-PCE or any other chemical, please email us at requests@chemical-collective.com. 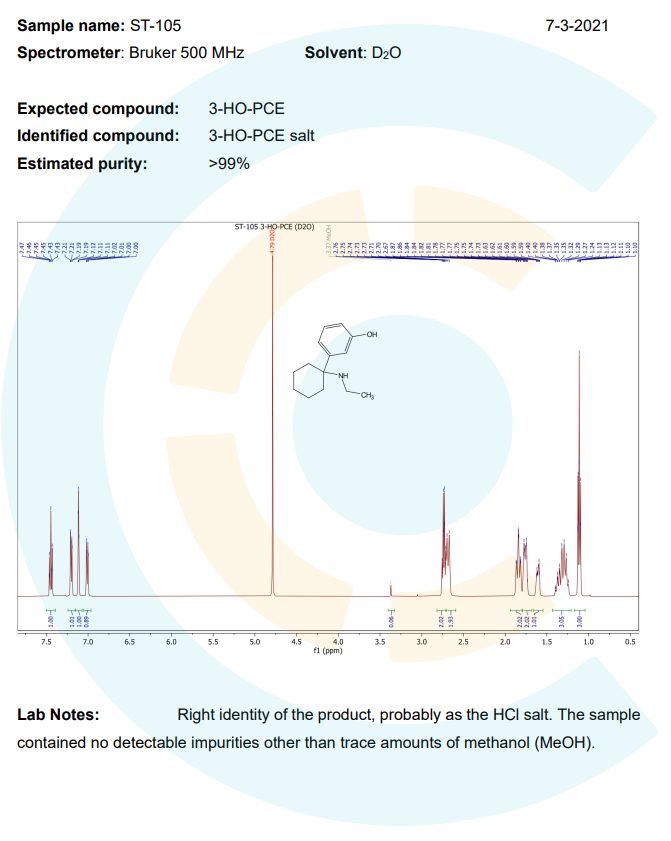